The Horrorscope for the week!! Going to be a busy week. The reality TV show thing might be fun. I just hope it is "Dream House" and not "Big Brother".

This week January 29 through February 4 Libra Your social life could be quite dramatic on Monday, and you might feel as if you are the star of your own reality TV show. On the following day, you could hear that a coworker has an interest in you beyond the office. Even if you're single and available, proceed with caution. Toward mid-week, you could reach an understanding with your romantic partner over issues you haven't been able to resolve. Friday's Full Moon may bring a new friend into your life who eventually becomes something more. Alternatively, you could end a relationship that has been taking more from you than it has given.

The book required for the next class arrived today. (I love you, Amazon! Book=$3 Shipping= $5!!!) There may be a very good reason I'm out of commision on the blog for awhile, lol. Yes, I'll also be reading. Reading the reviews last week, I knew this was going to be a big book, but.....900 pages? Mr. Kissinger may be a bit long-winded, eh? So far, some 50 pages in, it's pretty good reading. I'm on the chapter now about the difference between Theo. Roosevelt's style of foreign policy and that of Woodrow Wilson. Fun stuff! :-D Now, I just need to figure out how to apply these diplomatic and foreign policy principles to my personal life. [ /snark]

[Top]
"His mother wed his dead murdered father's brother!" Next--Jerry Springer. (William Shakespeare "Hamlet") Grim, gray New England -- all adulterers receive free monogramming. (Nathaniel Hawthorne "The Scarlet Letter") This is just to say I screwed around. Forgive me. I enjoyed it so. (St Augustine "The Confessions") Single white lass seeks landed gent for marriage, whist. No parsons, thank you. (Jane Austen "Pride and Prejudice") If I think, I am. If I don't exist, how do I know about me? (Rene Descartes "Discourse on Method") Substance has essence. Form adds whatness to thatness. Whatsits have thinghood. (Aristotle "Metaphysics") I, Rodya, killed her to prove my theory. Uh-oh. Back to square oneski. (Fyodor Dostoyevsky "Crime and Punishment") Lecherous linguist -- he lays low and is laid low after laying Lo. (Vladimir Nabakov "Lolita") Love is a thoughtcrime. The Thought Police make Winston forget whatsername. (George Orwell "1984") "Who dat fine knight be?" asked the saucy Moorish wench. "Dat be Ivan, ho." (Sir Walter Scott "Ivanhoe") Like the cicada, Molly takes many years to say "Yes" to Leo. (James Joyce "Ulysses") Advice for those in a difficult position. First, be flexible. (Vatsayana "Kama Sutra") She has shot the duck! No, Hedvig has shot herself. [Offstage, relieved quacks.] (Henrik Ibsen "The Wild Duck") Old pond. Frog jumps in. Repressed sexual desire, clearly Oedipal. (Sigmund Freud "The Interpretation of Dreams")

[Top]
For any political persuasion.... 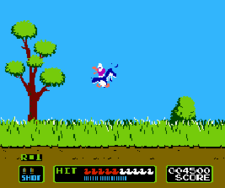 After a semi-panicky installation of a new wireless router-- WHAT do we keep doing to those poor things, anyway? I think that's the third router I've killed in the last year or so!!-- I am officially done with IR1. Exam taken. Examinee collapsed. 8-} At least #2 daughter is happy about the new router, since it happens to be compatible with the video game she received for Christmas. So now she can play Mariocart with other Nintendo addicts in faraway places. I never would have imagined it back in the days of "Duck Hunt".

[Top]
All discussions and essays finished for IR1!!!! :-D All I have left is the....ouch.... the dreaded "Final", which I'll be taking Tuesday morning, before the fun begins on Wednesday. Wish me luck, kiddies! IR2 begins in March, and it looks like a good one:

Course Description This course analyzes international relations from 1945 to the present. Students will become thoroughly familiar with events and major interpretive issues. Topics include the Cold War, decolonization, the role of the United Nations and other non-governmental organizations, the development of international terrorism, the Arab-Israeli and Persian Gulf conflicts, and the Korean and Vietnam Wars.

Cold War stuff. My favorite! :-D (Probably because I'm OLD enough to remember it) That leaves me one month to get everything done. On the other hand, I'm due for a spring break. Sunshine and a beach sound good right now.

Chavez, a Cuba ally re-elected by a landslide in December, this month launched a campaign to consolidate power by nationalizing key industries, seeking expanded executive powers and pushing for unlimited presidential re-election. "That is a sacrosanct legal authority of Venezuela. Go to hell, gringos! Go home! Go home!" Chavez said during his weekly Sunday broadcast. "We're free here, and every day we'll be more free." Chavez also took on U.S. Secretary of State Condoleezza Rice, who has described Chavez as a "negative force" in the region. "Hi Condoleezza, how are you? You've forgotten about me, my little girl," said Chavez, who last year called President Bush "the devil" during a U.N. speech.

"My little girl"? Uh huh. Tell me that a woman who can carry off spiked boots and a dress right out of "The Matrix" can't kick the a** of a Venezuelan thug. With one hand tied behind her back.

PASADENA, Calif. - Every parent's nightmare — being exposed for not knowing what's in your kid's school textbook — will soon play out on national television. Fox announced Saturday that it is making a new game show, "Are You Smarter Than a Fifth Grader?" that will air sometime later this year, perhaps as early as the spring. Adults will compete in a quiz based on questions from elementary school textbooks. Actual elementary school students will be on hand as "experts" for the adults to consult with.

Heck. Fifth grade? I think I was faking homework help by the end of third grade. Especially in math, lol. I definitely want to watch this show, and see how I do. [Update: I meant by the time the kids were in third grade!!]

[Top]
A buddy sent me this joke today. I'm beginning to think my friends are trying to tell me something. I just wish I knew what.

While I was watching golf this weekend, my wife and I got into a conversation about life and death, and the need for living wills. During the course of the conversation I told her that I never wanted to exist in a vegetative state, dependent on some machine and taking fluids from a bottle. She got up, unplugged the TV and threw out all my beer. ....Sometimes it's tough being married to a smart ass.