Uh, oh. The three scariest words in the world for somebody who can no longer run since knee surgery are "Tag. You're it". Old buddy Bill from InstaPinch surely picked a [insert favorite naval aviator terminology for extremely slow moving target here] when he sent this one my way. [Update: I have been informed that the correct "naval aviator terminology for extremely slow moving target" is "Zeppelin". Which is appropriate, since I am a huge Jimmy Page fan] 1. I am without a doubt the most gullible person in this entire world. I will believe anything, anytime, anywhere, anyhow that anybody tells me. I am one of four people in the entire country who has spent an evening in the woods shining a flashlight into a paper sack, chanting "heeeeere, snipe, snipe, snipe". Hey, I was eleven, what can I say? But if you have a practical joke you need to try out? Call me. Anytime. Really. 2. Karl, knowing your profession, you may not want to read this one. When I was 16, I was talked into trying to sneak out of the bill at an Indian restaurant in London by two classmates. ( It's that gullibility thing again.) We all three made it out the door, but the traffic light changed and the slowest of us ( guess who that would be- I wasn't very speedy even before the knee surgery! ) was dragged back into the restaurant by the collar, face burning and terrified, until my two classmates came back and paid their share of the bill. It remains to this day the most embarrassing and never-ever-to-be-repeated experience of my life. By the way, those two classmates? One is now a college professor, and the other is a Judge. I will leave it at that. 3. Going to take a cue from Pinch on this next one. If he can 'fess up to his weight, so can I. Sorta. I am six feet tall. I spent my most of my thirties and began my forties as an extremely large person. I am not going to give you exact numbers, but when I reach the number I consider a good and reasonable and achievable goal, I will have lost very nearly one hundred pounds. I'm almost there now, but this last bit is a lot harder than the rest. I have discovered a new diet recently however. All it takes is thinking of somebody eating mayonnaise right out of the jar, and your appetite evaporates instantly. 4. I passed my motorcycle endorsement test on the first try. The other adult member of my immediate family at the time very nearly got a speeding ticket. During the test. Think I might have rubbed it in just a teensy bit? Yew betcha. 5. Nobody has seen my natural hair color since about 1985. I'm not even sure what color it might be under the L'oreal, but I'm guessing it ain't reddish-blondish-brownish anymore. Hmmm, 1985. Isn't that the same year my number one daughter was born? Coincidence? I think not. Now, the tough part. None of the people I want to tag are active bloggers!! :-(( So, I'm going to issue a challenge. I want to hear from family members, whether you want to do it in comments or whether you want me to set you up your own blog (hint, hint, Kidbrudder) or even just a post from here or InstaPinch or Chef Mojo. I'm sure we would help out our family members right, guys?? I want all of you to join in this one! (I'm still a little :-& over the idea of somebody eating mayonnaise with a spoon right from the jar.)

Me and my gangsta daughters on Christmas Day..... One day, sometime in the future, I will get a photo of the three of us in which we all look good. No gangsta signs, no crossed eyes, no CLOSED eyes, no drool.... I swear, if I have to pay for it I will get one eventually, lol!

Schulzie, the world's meanest nastiest guard dachshund, trapped me on the steps. He wouldn't let anyone pass until they had shared their Christmas Cookies. (Fat chance of THAT!)

One of the things we did was show the new family historian (Hi Paul!) some of our family "primary sources"--the saber and diaries belonging to Edward Bruce Crofoot, my great-great-grandfather.  The diary is a record of his time with the Wisconsin 32nd, who spent a little time in Georgia on a trip across the state during the Civil War.

The writing is pretty tough to read, although my Dad "translated" most of it several years ago. Lieutenant Crofoot had beautiful handwriting with swirls and flourishes-- and in a century and a half, we have lost the ability to read "real handwriting".

Hope all of you had a wonderful warm Christmas.....

Kidbrudder forwarded a letter from daughter-in-law Brooke (Hi Brooke and Mark!!); who included a couple of pictures from her recent musical evening with Darryl Worley and Mark Wills (although both of these pics are of Worley, I think--not being a country fan myself, I had to go googling!) Here are some pics from the other night. They had a concert and Mark Wills and Darryl Worely were here. I got autographs and got to meet them. Mark Wills made me come behind the table (where I wan't supposed to be) and gave me the biggest hug and kissed me on my cheek! I'm so special! :) Anyways... I had a great time and just wanted to share a couple of the pictures with ya'll! I love ya'll! Merry Christmas....
Well, almost!

All my Love,
Brooke

Merry Christmas, Brooke--we'll be thinking of you and of all the others so far away from home this holiday.

The best thing---nay, the ONLY good thing about Christmas shopping on the VERY LAST SHOPPING DAY BEFORE THE HOLIDAY is the Chinese Buffet at the end. I had my shoes off underneath the table....ahhhhhh, heaven.....

Santa's Helpers....Mr. Indiana and Ms. Michigan. Yes. We *are* Midwesterners. How did you guess?

"Mushrooms and Noodles are GOOD for you. Kwitcherbitchen and EAT YOUR 'SHROOMS."

And knowing that ALL the Christmas shopping is done is even BETTER.

[Top]
Was out to the folks' house a couple of days ago. Dad had some papers to show me, something we have been seeking for a very long time. My great-grandparents on my mother's side emigrated from Germany, arriving in Wisconsin around 1885. I have an oak kitchen table which was one of their first purchases here in the States as they were setting up their household in their new country. My parents gave it to me for my birthday a few years ago, and it's one of my treasured possessions (I'm kinda weird about family heirlooms. I'd rather have a beatup rocking chair that's been in the family for a hundred years than a new La-Z-boy ANY day). Anyway, that's all we really knew about them. My mother describes her grandparents as somewhat close-mouthed, never discussing Germany. Family lore has it that Great-Grandpa Christoph had to leave Germany because he killed a man, but nobody really knows. All we knew is that they corresponded with relatives in Berlin during WW2, and lost contact with them after the War. I had always wondered if, knowing the family story about leaving Germany the way he did, my great-grandfather may have changed his name upon arriving in this country. Maybe that's why we could never find their name on any ship's records or immigration lists. We never knew exactly when they left, when they got here, or HOW they got here. We know now.

This is a jpeg of a list of immigrants arriving at New York ( not through Ellis Island, which didn't open for business until 1892) on July 25th, 1885. The Stelter family, which included Christoph, wife Elina (known as Lena), and children Emma and Ernst; departed from the port of Stettin, Germany (now a part of Poland, and I'm not even going to *try* to spell the name!) on the ship "Katie". No, my grandfather Otto is not listed there, as he was born a year or two after their arrival in 'sconsin. Got 'em.

[Top]
The crewdudes and I decided that it's pretty bad when the "best prime rib I ever had" were the ones we smoked at work for our (early) Christmas dinner. My "Grandson", Adrian Abyss. The first boy child in our family. Isn't he just adorable? Such a sweet little guy... hey, I'm allowed to get googly over my grandson, right?

He's only here for the weekend, but he is making his presence....umm...known. Yes, "Baby think it over" is making us do just that. He slept all night last night. I don't think she is getting the true experience of being a mother yet, but we still have two more nights.

I have visions of the Health teacher at home, smiling evilly as she punches in the code that gives the baby a fierce case of colic which can only be relieved by a drive in the car at 3 am.

[Top]
I will be posting my thanks later this evening. AFTER turkey! :-D [UPDATE] These are the things I am thankful for. 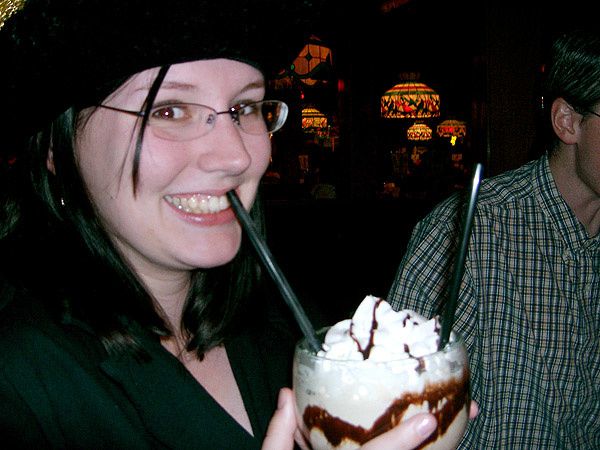