This week October 16 through October 22 Libra You are still working hard, but after the events of last week you may be just as confused as ever. This week you seem determined to sort it all out and to create a definite plan. The Sun sextiles Saturn on Monday, so the advice of friends may come in very useful. Their experiences with certain issues that you are facing may help you to understand what you need to do next. Tuesday brings some introspection of a more intense kind as you try to communicate with someone over an issue that needs healing.

[Top]
...was sent by buddy Barb. I wonder if it's a coincidence that her new Pomeranian puppy is named "Snowball"? 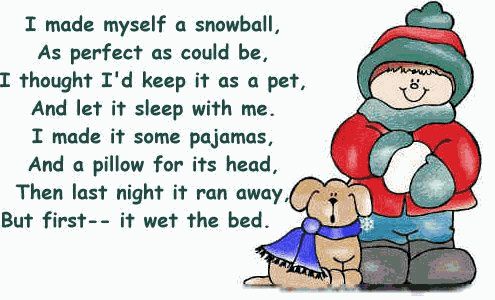 [Top]
...to all you paraskavedekatriaphobics out there!!! May you all have a wonderful day!!! (and yes, I actually did know that word without looking it up. Trivia goddess, and all.) I mean...the headline says it all. The only thing that could have improved it might have been the mention of "deer hunting". And beer. Maybe.... Sex and Leinie's with the Green Bay Packers! Wearing Blaze Orange!! Sandy would win in a landslide. LaFollette wouldn't stand a chance, political legacy or no.

The usually ho-hum race for Wisconsin secretary of state is being spiced up by one candidate's naughty tell-all book about her bed-hopping exploits with Green Bay football legends during the team's glory days under Vince Lombardi in the 1960s. Sandy Sullivan, a 65-year-old Republican with no political experience, self-published a gushing memoir in 2004 titled "Green Bay Love Stories and Other Affairs" in which she claims she was the girlfriend of Green Bay Packers Paul Hornung and Dan Currie, deflected a pass from Hall of Famer Don Hutson and was on the receiving end of a saucy comment from Richard Nixon. In it, she confides that her goal was always to marry a pro football player, saying they are "fast, sleek and clean," are built like "Greek gods" and love women. "The football players of the 1950s and '60s were every bit as 'HOT' as the men of the present day, if not more so," Sullivan writes of the days when she was a trim, miniskirted brunette who did some modeling. "Remember, the '60s was the 'dawning of the Age of Aquarius' and some women ... were thrilled to experience this brave, new freedom, and celebrate our sexuality ... and the football players loved it!"

[Top]
The world seems just a wee bit smaller today...... :D And NO, I am *not* going to show the photo inside. Let's put it this way. I can't decide whether I look more like a deranged blonde terrorist or a frightened-deer-in-the-headlights. If THIS photo doesn't get me an intense wanding at the next airport, NOTHING will.

Congratulations! Today is your day. You're off to Great Places! You're off and away! --Dr. Suess [Top]
Look out, you southern-type folks -- they're on their way. The last week or so, I've been able to hear honking nearly every night as they fly over. They're also on the ground. Leaving PILES of goose poop behind. Some of which I managed to pedal over on the trail the other day and splatter EVERYWHERE. Goose poop on a white sweatshirt is an instant laundry problem. Doesn't scrub off bare legs too well, either. [Top]
Okay, now I am *not* going to do a daily countdown. And I pormise this is *not* going to turn into the "Seger Fan Page" even though the last couple of posts might look like it. Surfing around Youtube brought back some memories of why I'm a Seger fan. I booked a couple of the videos, and if I feel the inclination I may write about them, lol. Then again, maybe not. It's keeping my mind off some other things that I want to avoid thinking about for a few hours, anyway. YouTube is a good way to kill HOURS. But one song on Youtube in particular was my introduction, the song that got me hooked. I'm talking about "Turn the Page" of course ....what a wonderful song this was. It was the summer of '76. We were in between moves at the time, between Bowie, Maryland and England. I was heartbroken at leaving Bowie--I'd made a lot of friends in the year we were there, and had begun to get very involved in high school life for the first time. It was awful to just pack up and leave at the end of my sophomore year, even though I was beginning to get excited about the idea of living in England. (I was still trying to decide if I was nervous at the prospect of living away from my family in a dorm at school, alternating between "PLEASE don't make me go away" and "I can't WAIT to get away from you". On an hourly basis.) We were living in northern Wis, staying with my grandmother while my father was in Spain? Montreal? can't remember. All I really remember is that I had begun to tire of the constant cross-country moves. Although new places were always exciting, I wanted to have friends for more than a few months before we packed up to move again. Our lone rock radio station up here had a bad habit of playing incredibly great songs and then not telling who the artist was--one of my absolute pet peeves, and the reason I love satellite radio so much now. I heard so much good music in those days, from Springsteen to Heart to Steve Miller to the first Boston album--and it was sometimes weeks before I could figure out who the bands were. Darned WIFC, anyway. I do remember the first time I heard this song. I had a small radio that I would turn on in my bedroom as I went to sleep. I happened to be lying there sleepless in the dark late one night, thinking the usual teenage angsty stuff (emo kids had nothing on me in the 70's)... and this quiet slow ballad started playing. I turned the radio up a bit, and lay there transfixed, frozen absolutely still, trying to catch every word of the song. That mournful saxophone, sad enough to bring a hormonally-charged teenage girl who missed her friends to tears. The dreamlike sound of the electric piano. That gravel-over-silk voice, dramatic even in its restraint. The way the singer referred to himself in the third person during the verses, as if he were outside looking in at the lonely traveler who missed his home. The line

..and you pretend it doesn't bother you, but you just want to explode....

Whoa. The story of my life at age 15. A life spent rootless on the road was something I immediately identified with. Yeah, yeah--emotional explosions come with the territory of being 15....but the song stuck with me. I had to find out who this band was!!

[Top]
She shoots! She SCORES. Something good had to happen this weekend, right? Item #37 on my list is about to be completed. Thirty-odd years since discovering his music and falling in love....I'm finally going to get to see him. I just knew he'd hate retirement, I just KNEW it! Bob sweetie, get the leathers out and Wait For Me, I'm coming to Milwaukee!!! I love the answer to the inevitable question about going out on the road at the age of 61. "Yeah, I'm going to be doing a few more ballads this time." Now THAT is growing old disgracefully!

Tickets: $60 each, not counting all the tax and Ticketmonster fees Parking Fees: probably about $100, lol Finally going to see one of my alltime favorite beloved rockers perform in REAL LIFE: Absolutely Priceless.

Two tickets. MAIN FLOOR seats. Going to be weird to not be in the nosebleed seats! :-D Who wants to go???