Login + Create my blog
I've been out of the loop for a few days, due to some busy-making issues here. I haven't looked at the news in days. I haven't even seen a weather report. It's only this afternoon that I've taken a few minutes to look around. I should have just stayed buried. Awhile back, before the election, I got into a "discussion" with an old friend over the candidates for President and VP. It didn't get too heated, but it did point out a few differences in how we looked at our choices. His basic premise went something like this:

"With Obama you get someone of excellent character, intellectual fortitude, a scholarly grasp of the constitution — which is a MAJOR issue ignored by press — in the wake of Bush-Cheney-Rove, and a clear identification with a broader coalition of Americans."

I didn't particularly agree, but... whatever. So, for the last month or so I've been watching somewhat disinterestedly to see some examples of the character and scholarly grasps of this administration. What I see are things like this:

"Here's the problem," Mr. Obama said, "It's almost like they've got -- they've got a bomb strapped to them and they've got their hand on the trigger. You don't want them to blow up. But you've got to kind of talk them, ease that finger off the trigger."

Wait a minute. Did Obama just compare AIG and Citicorp to suicide bombers??? I guess that goes a loooong way towards creating an understanding of this admin's foreign policy, or lack thereof. 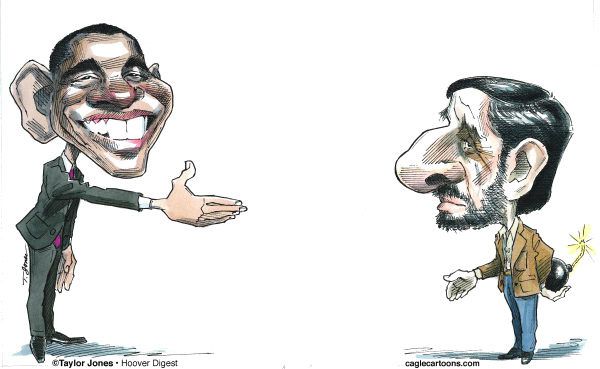 h/t to SCG Maybe if we just bail out Iran, we could take their "finger off the trigger", too. ~~~~~~~~~~~~~~~~~~~~~~~~~~~~~~~~~~~~~ I'm also probably one of four people in the country who wasn't avidly glued to the tube for the One's appearance on the Tonight Show the other night, in which he gave up this wonderful metaphor for his bowling skills: I'm just completely jaw-droppingly gobsmacked. What the hell, did his teleprompter fail? Did I just hear our President make a 'tard joke on national TV??? And this from a President whose party platform during the elections seemed to be based on the fact that President Bush, who by the way was not even a candidate, wasn't much of a speaker??? I am despairing more and more each day of the Institute for Tricycle Riding at 1600 Pennsylvania Ave. And that's not even getting into the question of the Administration's tenuous grasp on the Constitution. (Thanks to the Chef for that link.)