November 2nd, 1976. Election Day. The day I left the comforting arms of my home country for my second adventure abroad. At roughly 6 pm the day Jimmy Carter was elected President, I with my family, took off from  Washington, DC to fly to London, England to begin what was for me the best two years of my life.

Impressions of the trip.... I remember getting to Dulles with an enormous pile of luggage. It was going to be a few weeks before furniture and large trunks arrived from the states, so we had to have enough clothing, etc. to last for awhile. And since I was going to be headed up to my new school almost immediately, I had basically 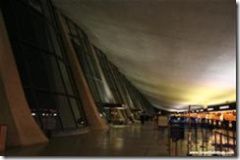 everything I owned crammed into a couple of large suitcases. I kid you not, I didn't know where they were going to put all this stuff on the plane. I felt like a gypsy perched on top of this mountain of baggage. The phrase that kept going through my mind as I surveyed the mountain was "You're gonna need a bigger plane".

My parents took off for ticket counters and disappeared, leaving me with one of my younger brothers to keep an eye on the pile of suitcases. I remember looking up at that enormous swooping roof, back at the suitcases, and wondering just exactly what I was supposed to do if anyone did try to make off with all of our earthly possessions. I decided I'd send Scott after them. ;-)

That flight lasted.... forever. My mother kept telling me to try to sleep, knowing that jet lag was gonna get us; but I was far too excited to sleep. OH my god, we're going to go live in a foreign country!! Nobody gets to do this in the real world, and here I am!!! Even the turbulence immediately after our meals were served could not dampen my excitement, although I thought it was very nice of the pilot to note "Ladies and Gentlemen, we'll be experiencing a little turbulence tonight" AFTER most of my dinner found it's way into my lap. I also very much enjoyed the selection of music on the little headphones the attendant handed me. Barry Manilow was the highlight-- I will never, for the rest of my days, be able to listen to the song "Mandy" again without wanting to be ill. 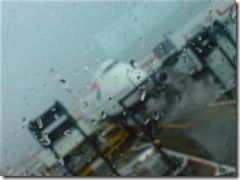 Heathrow...my first view of England. Hey, it's the middle of the night, why is it daylight???  They were right...it does rain a lot here, doesn't it?

Tired, bleary-eyed, stiff from being trapped for hours in those cramped seats. Head still ringing from Barry Manilow and hoping I didn't look too bad with the stains from my overturned dinner still on my jeans.

Going through customs, I was quietly excited about getting my very first visa stamp on my very own passport. He headed into the main part of the airport to baggage and the taxi stand (I was still wondering if there was a taxi big enough for luggage mountain). As we rode down the escalator, I spotted a parrot at the bottom of the steps.

What I had spotted was a six-foot-tall young man in a shiny leather jacket covered in pins and heeled boots. Tattoos. Eye makeup. LOTS of eye makeup, most of it running down his cheeks as if his mascara had run in the rain. And the most enormous orange-with-purple-streaks Mohawk hairdo I'd ever seen, an easy 7" tall, towering over the shaved sides of his head. The Punk look hadn't arrived in the US yet, so this was quite the sight for my first hour in England. I was in love with England already.

We got our bags and found our way to the taxi stand with the help of a half-dozen porters. Somehow, we  managed to p ack people and bags into one large cab, although I think they had to jump up and down on the "boot" (boot? I love this place!!  ) to get it to close. The cabbie, after finding out this was our very first trip to London, offered to take up past some of the sights on our way to the hotel. At least, I think that's what he said. Me and my slight Maryland southern drawl had just come up against "Cockney".

So, we saw a few sights. I was exhausted an 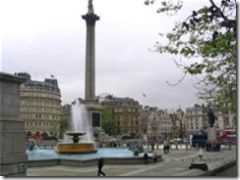 d would have done anything for a soft bed at that point, but knowing that I was going to be "going to school in London" made me look around at what was to be my city. My impression was... gray. November in London is GRAY.

And it was so exciting. I was glued to the window, looking at my new home. I couldn't WAIT to go explore, to see all the things I'd been reading about for the last six months since our move was first a possibility. I. could. not. wait. We finally got to our hotel. I didn't care if they gave me a mattress in a hallway at this point, but we checked into a building that looked nothing like the Holiday Inns of the US. This hotel was in a building that probably dated back a couple of hundred years, and it was gorgeous. Staggering into our rooms, I headed straight for the loo (Loo? I love this place!!) and switched on the light. And switched it again. Still dark. Suddenly it dawned on me that the bathroom was black. BLACK.

Finally....a bed. The end of the longest but most wonderful day. Tired as I was, it took awhile to finally sleep. I was in a new world.

I was in ENGLAND.